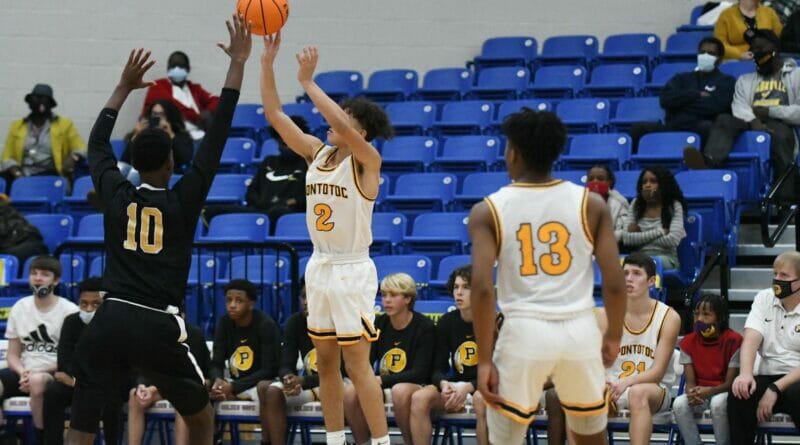 Pontotoc built a big first half lead against Holly Springs at the Hound Dog Classic in Tupelo on Saturday and then held on late to claim a victory over the perennial power from Marshall County.

The Warriors used a balanced offensive attack that saw eight players score buckets to go along wtih creating 13 turnovers to come away with the 57-47 win over the Hawks.

Pontotoc got six first half points from each of JJ Washington, Daedae Scott and Joe Haze Austin to go into the break with a 31-14 advantage.

Holly Springs began to chip away at the lead in the third quarter, outscoring the Warriors 17-10 behind 8 points from Charrez Amrose. Zane Tipler and Austin each hit a big three pointer in the third to help Pontotoc maintain their advantage.

The Hawks, state semi-finalists a season ago, came out with increased defensive intensity in the fourth quarter and were able to tie the contest at 43 with 4 minutes to play on a Ded’Drick Faulkner jumper.

The Warriors answered with a a big three point bucket from Austin, his third of the game, and then relied on their defense to lead to offense to close out the game on a 14-4 run that included four made free throws from Rock Robinson and Scott.

Austin was named player of the game with 14 points. Scott had 15 to lead the Warriors in scoring. Tipler added 7.

More pictures from Saturday’s contest will be on the Pontotoc County Sports Facebook page.