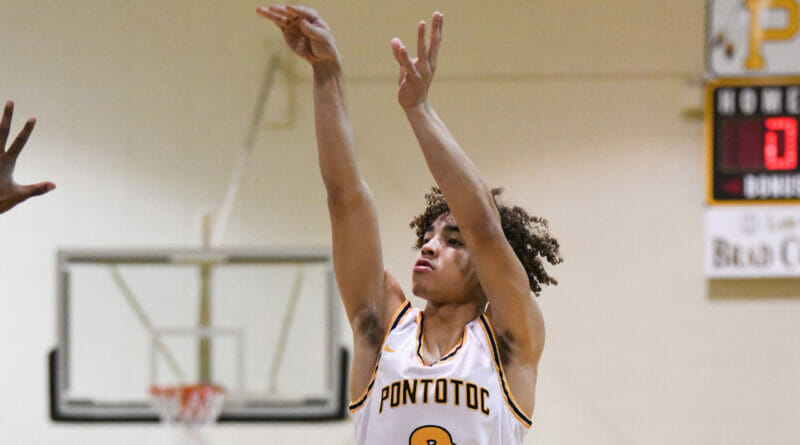 The Pontotoc Warriors put up a huge win in round one of the playoffs following their second-place division finish, defeating the Itawamba Indians 72-47.

The Warriors came out hot.  Zane Tipler opened with a long three, immediately followed by a steal from Jaylan Edwards with a pass down the court to Dawson Rice for the score.

The race was on from there.

The Indians struggled to break through the Warriors full court press, with another steal and a three from Edwards putting the Warriors up 8-0 before Orr put the Indians on the board with five minutes left in the first.

After fumbling their first couple of possessions, the Indians found their groove, countering the Warriors point for point, and taking the lead to end the quarter up 12-13.

The Warriors fed Rice under the goal multiples times in the second quarter for eight points, while Edwards and Tipler each landed another three from the field.  With just over a minute left, Itawamba’s # Arvesta Troupe put up back-to-back baskets, with Grant Hutton adding another, making it appear as though the Indians would head into the half on top 28-31.

Play had been extremely aggressive through the half, putting both teams squarely in bonus territory quicky into the second, causing a late foul to send Edwards to the line for a 1/1 which he turned into two shrinking the Indian lead to just one, 30-31.

Pontotoc came out of the locker room for the second half on a mission, and Tyler Shepard, who was noticeably absent in the first, opened play showing out with a seven-point run to put the Warriors back on top 37-31.  Feeding of the energy of his teammates and the crowd, Johnathan Armstrong followed Shepard’s run with a steal and a layup, and another basket off a rebound, before Edwards put up his third three of the night putting the Warriors up 48-36.

The Warriors played well defensively, holding the Indians to only nine points in the third, much less than the Warriors twenty-three.  Tipler put up his third three of the evening as the quarter wrapped up, putting the score in favor of the Warriors 53-40.

The Warriors continued to put pressure on the Indians through the fourth, this time holding them to just seven points to their own nineteen, led by Edwards and Jack Sansing with seven each.  The Warriors pushed until the very end, securing a strong 72-47 victory, and Edwards leading his team for the night with 20 points.

The Warriors will travel to Leake Central to face off against the Gators Saturday 2/19 at 7:00 for round two.