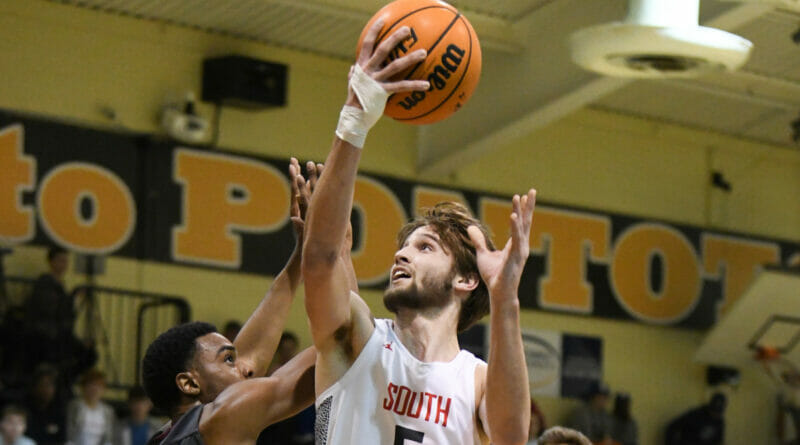 Number five seed Houston was looking to finally take home a win against number four seeded South Pontotoc in round one of the Boys Class 4A, Region 2 Division Tournament Tuesday night. After South Pontotoc beat Houston twice during the regular season, but only by a couple of points, fans showed up expecting to see an exciting game, and they were not disappointed.  Without a huge margin most of the game, the Cougars ended the night with a decisive 60-39 victory.

The Hilltoppers got on the board first with a free throw and basket from Red Parker, but back-to-back Cougar goals courtesy of Pacey Matthews and Brailon Walls tipped the scales in South Pontotoc’s favor 4-3.  A dunk from Parker ignited the crowd as the Toppers swung back into the top position, but the Cougars would have the last say with eight points, including 2/2 from the line thanks to Topper fouls, to end the quarter back on top 12-7.

The second quarter of play saw Joe Haze Austin come alive- opening with two back-to-back baskets.  The Toppers continued fouling giving up four free points as the Cougars went 4/4 in the second ( Austin 2/2 and Matthews 2/2), and three 3-pointers from Matthews, Jayden Hooker, and Austin helped push the Cougars to a 29-17 lead at the half.

Parker opened the second half of play for the Toppers, leaving them down by only ten.  They closed the gap to five before Austin put up 11 points for the Cougars, his highest quarter of the night.

A shot plus foul for Matthews rounded out scoring in the third for the Cougars, while Parker got in one more free throw for the Toppers before the quarter ended, leaving the Cougars up 45-33 going into the fourth.

The final period swung heavily in favor of the Cougars, outscoring Houston 15-6, even as South Pontotoc afforded playing time to some of their depth players while burning the clock.

The Cougars didn’t squeak by with a two-point win this time, but instead closed out the first round with a strong twenty-one-point victory, 60-39, as they prepare to face off against the number one Pontotoc Warriors on Thursday evening.

Austin led the Cougars with 27 points followed by Matthews with 19, and Walls with 8.