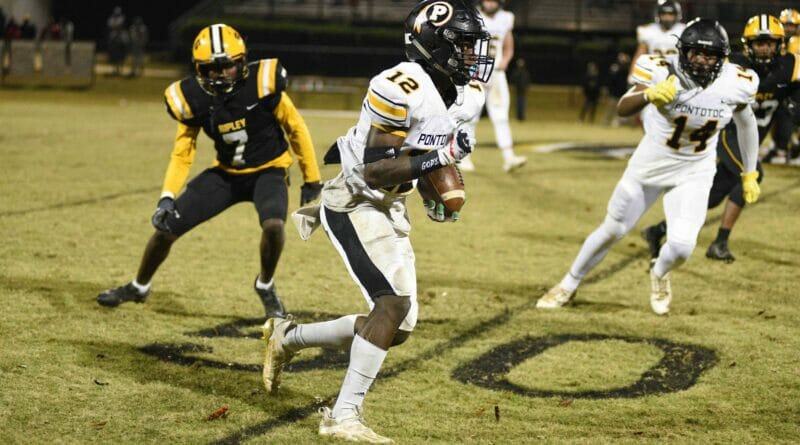 Pontotoc came out firing on all cylinders in their second round playoff matchup against Ripley on Friday night.

Once they were up to speed, they took off from the runway and cruised to victory through the air. The Warriors are on to round three with a 32-15 victory over the host Tigers.

After forcing a three and out from Ripley on their opening drive, the Warriors went in to the endzone on 5 plays culminating in a Jemarkus Whitfield seven yard touchdown run on 4th and one.

The next two scores for the Warriors were lightning quick

Cade Armstrong hit Kyleal Mcshan on a pair of touchdown passes, one for 27 yards after a Marty Reel interception and return and one for 74 yards after a Ripley punt, and Pontotoc jumped ahead 21-0 after one quarter. They would never look back and not trail in the contest.

Ripley answered with a Ty Long touchdown pass to Jabez Johnson just before the half to give the Tigers a bit of momentum before the break. The Warriors led 21-7 at halftime.

Eddie Nolasco would hit a 25 yard field goal to give the Warriors a bit of a cushion with a 24-7 advantage .

Sentavius Hunt would add a highlight reel touchdown for the Tigers to cut the Pontotoc lead to just 9 headed in to the fourth quarter.

The Warriors would get a methodical drive early in the fourth quarter to push the Warrior lead to 16.

Jordan Ball went in from 1 yard out to essentially ice the ballgame.

With the win, Pontotoc moves to 10-1. They host Louisville in the third round next Friday.