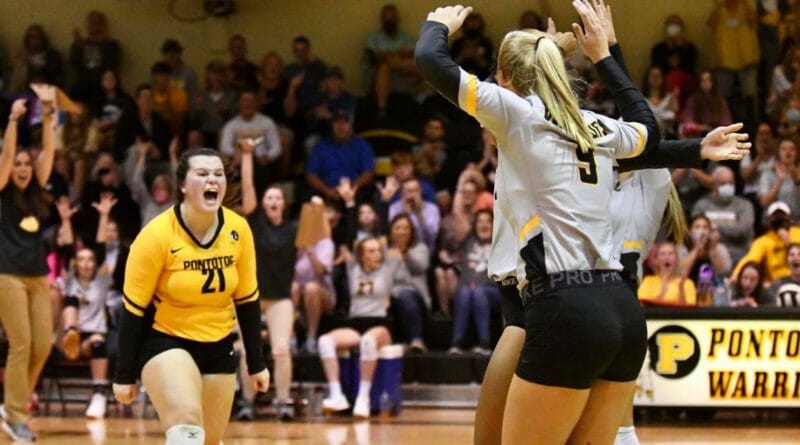 Pontotoc won on Tuesday night how they have won almost all of their previous 17 matches during the 2020 season. They simply overwhelm you at the net with the confidence that their back line will pick up the slack.

In the North Half title game, a familiar face controlled the net, as De’aisha Browner totalled 11 blocks and seven kills as Pontotoc moved to their first ever state title game appearance with a 3-1 victory over Corinth 25-10, 27-25, 23-25, 25-19.

The Lady Warriors most impressive jumps and approaches of the night could very well have been after they claimed each win in the match.

Pontotoc took the first set thanks to a total team effort that saw 11 points on kills, 4 on blocks and 4 on aces. A come from behind win in the 2nd set ended on a Mollie Rackley kill that put the Lady Warriors one win away from a trip to play for a title.

Corinth, who came in to the contest having won four straight elimination games after needing a win in the last game of the season, was playing it’s third road game of the playoffs. They showed they were a team Pontotoc would have to fight to close out in claiming the third set 25-23.

The Lady Warriors showed they were willing to fight for it in the fourth set.

After the match was tied at 14 following a kill/ace combo from Corinth’s Kate Nakagawa, Pontotoc went back to work closed out the game scoring the final five points highlighted by a block by Brawner and an ace from Caroline Howard, her fifth of the night, to end it.

The Lady Warriors had plents left in their legs to jump into each other to the soundtrack of PA announcer Ken Hester letting the entire gym know: “We are going to state!”

Audrey Hamill led with 12 kills while Kensley Nowicki added 10. Scout Waldrop led with 6 aces. Sadie Stegall added 7 kills and a pair of blocks while Samya Brooks contributed 3 blocks and a pair of kills.